The first generation of 360-degree cameras were essentially expensive toys with limited applications. Now that the technology has matured, things are starting to get interesting.

The latest generation of omnidirectional video cameras have better sensors, and higher resolutions. There’s even video stabilization that results in surprisingly usable footage. Plus you can do things that simply aren’t possible with a regular camera.

But which one is right for you? Here are the best 360-degree cameras available right now.

Why Should You Buy a 360-Degree Camera?

Cameras that can shoot 360-degree footage have at least two lenses; one at the front, and one at the back. These lenses capture wide-angle video. The camera stitches the footage together to create a single 360-degree image.

This has its benefits. There’s no need to frame your shots since you’re capturing everything around you. This is known as overcapture. You can then edit the footage down later to create your video. 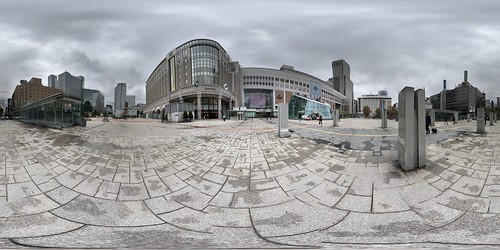 Most 360-degree cameras don’t feature a live preview screen, although they’ll often provide this feature through a companion smartphone app. This has allowed manufacturers to design compact and innovative cameras. These devices can shoot video and still photographs.

Most systems will allow you to export regular videos in 16:9 or square format for sharing on the web. Many even give you the 360-degree video files for immersive viewing in virtual reality. Aside from their technical benefits, 360-degree cameras are a lot of fun to play with too.

The Insta360 One X is one of the most popular cameras of its kind and for good reason. It’s the successor to the Insta360 One, and it improves on its predecessor in almost every way. The One X can shoot 5.7K video at 30fps, or 4K video at 50fps (the PAL standard) and 18MP stills.

The Insta360 One X does a stellar job of stabilizing wobbly video too. This is why so many turn to the One X for their 360-degree action camera needs. If you want to maximize image potential, you can shoot LOG video and RAW images.

There’s a capable HDR mode, and all of the camera functions can be manually controlled using the companion app. That’s the same app you’ll be editing and exporting videos with, and it’s one of the most intuative on the market.

You can use the app to grab shareable video from your overcapture footage. This includes stabalized hyper-lapse films where you can slow down and speed up footage for near professional-level results. If there’s one drawback to the Insta360 One X, it’s the 40 minutes of shooting you’ll get on a single charge.

Otherwise, it’s an impressive package, with a great mobile companion app, at a fair price. You can find out more about the camera in our review of the Insta360 One X.

The Insta360 EVO is an action camera with a unique hinged design. The hinge gives you the flexability to shoot 180-degree video in stereoscopic 3D, or full 360-degree video in 2D. The EVO’s capabilities largely mirror the One X, with 5.7K video at 30fps, 4K video at 50fps, and 18MP still images.

The EVO also uses the same smooth stabilization seen in the One X. There’s even RAW photography and LOG video capabilities too. If the One X is an action camera, the EVO is a camera for creating videos to be viewed in VR. The 180-degree 3D footage will really pop on a VR headset compared to flat 360-degree footage.

The One X has the edge if you’re going to be sharing your footage in standard size formats. However, if you’re going all-in on VR, then the 3D capabilities of the EVO are hard to beat.

What makes the Ricoh Theta Z1 unique is that it contains the largest sensor of any consumer 360-degree camera. The one-inch sensor, combined with Ricoh’s quality optics, delivers the best image quality outside of professional devices.

That larger sensor will help a lot when it comes to low light performance, particularly night shooting. More sensor space means better color reproduction, and less detail lost in the shadows and highlights. Dynamic range is much improved over standard 1/2.3-inch sensors too. This leads to video and stills coming looking better than footage from many regular action cameras.

Despite the high image quality, the Z1 only outputs 4K video at 30 frames per second, with an option for 2K capture at the same framerate. Still images are captured at 23MP resolution.

The Theta+ app is a capable mobile companion for overcapture and sharing purposes.  You could describe the Theta Z1 as a prosumer camera. You might find it worth almost double the price of the Insta 360 One X if the sensor benefits are a top priority for you.

The GoPro Fusion is the company’s first 360-degree camera. GoPro is a respected name in the consumer camera space, and the Fusion doesn’t disappoint offering 5.8K at 24fps, 5.2K at 30fps, and 3K video at 60fps.

The Fusion is fitted with a decent set of lenses, which means video quality is good, particularly considering the small sensor size. Like GoPro’s HERO cameras, the Fusion makes use of impressive stabilization techniques to smooth out bumps without the need for a gimbal.

Still image size is a little low at 18 megapixels, but it’s par for the course compared to the rest of the market. The camera is also waterproof, with a rubbery outer case and support for GoPro’s mounting system. This makes it easy to add the Fusion to your setup if you already own a GoPro camera.

Unfortunately, the GoPro Fusion desktop app has been the subject of critisism, with users noting that it’s very slow to stitch and process footage. Despite this, the GoPro Fusion is still a compelling choice, especially for its underwater capabilites.

With 5.8K video at 24fps and 4K at 30fps, the Rylo 360 matches GoPro’s impressive resolution and image quality. Also up to standard is the cinematic stabilization. These features are ideal, as the Rylo 360 has been designed as an action camera.

The companion app is well regarded for its intuitive and user-friendly design. You can use it to create interesting videos from overcapture by reframing your footage, playing around with the playback speed, and performing color corrections before exporting to your device.

One thing worth noting is that the companion app cannot live preview what the Rylo 360 is recording. This is less of an issue with 360-degree video since overcapture means you can reframe in post-production. However, it is worth noting since similar cameras do offer a live preview.

The Garmin VIRB 360 is another rugged 360-degree action camera. It has a waterproof design with replaceable lenses; perfect for any mishaps you may have along the way. The VIRB 360 shoots 5.7K video at 30fps, with 4K spherical stabilization and 360-degree audio.

What makes the VIRB 360 stand out is its array of sensors. These include a built-in barometer, accelerometer, gyroscope, and GPS sensor. With the additional data captured you can place informational overlays onto your footage, like speed or position on a map.

The VIRB 360 is pricey compared to some of these other options, and the software is a bit of a weak point according to many reviewers. Those issues aside, the best reason to go for Garmin’s offering is for the array of sensors that allow you to capture more than just video and audio.

The Best 360-Degree Camera for You

If the marketing materials for these cameras are to be believed, the only reason to buy a 360-degree camera is for high-octane activites. That isn’t the case. You don’t need to jump off a building to make good use of these cameras.

They make perfect travel companions since they’ll see more of your holiday than you will. They’re also popular with photographers looking to experiment with new ways of shooting stills and video.

Once you’ve chosen the right 360-degree camera for you, you’ll want to start shooting. If you’re looking for some inspiration check out some of the most outrageous 360-degree videos on the web The 10 Most Insane 360-Degree Videos From Facebook You've probably seen a couple of Facebook's mesmerizing 360-degree videos already. Most are great, but some are downright incredible. Here are 10 of our favorites. Read More .