What do you do when you’ve scored a break from work, are waiting for a bus or have just managed to find a bit of downtime while waiting for something? Do you pull out your phone and pass the time that way? If so, what are you doing? Reading Reddit, RSS feeds, or ebooks? Or do you prefer to play games?

For those of you who love to play games in these random idle moments, here’s a list of great games which are entertaining, cheap, casual, silly and easy to pick up and set down. And if these aren’t enough, be sure to check out these fun Android games that require no Wi-Fi 20 Best Offline Games on Android That Don't Need Internet These best offline games for Android are from all genres, including strategy, puzzle, racing, and more. No internet required. Read More .

Mr Legs is a very silly-sounding game in which a stick figure runs around eating cherries. The artwork is endearing and humorous and the game itself will hook you instantly.

With Mr Legs, you collect cherries by magically growing his legs and running fast while avoiding bombs and birds. The backdrop for this nonsense varies from deserts through handbags and to musical scores.

Where’s My Water is a Disney game designed for kids, but it’s still strangely addictive for all ages. It’s a simple premise: Swampy’s pipes are broken and you need to get them working so he can take a shower with his rubber ducky. The game will throw lots of physics-based puzzles at you in order for you to get the water flowing again.

Cut The Rope – It’s a simple idea behind a complicated and silly physics-based game. All you need to do is cut the rope in order to get the candy to Om Nom the monster. To make things difficult, you also have to collect stars and break bubbles. You’ll be frustrated and engrossed in no time at all.

Draw Something is the hottest game in the Android market place right now. It is a turn-based game which you can play against your friends (Android or iOS). It’s a lot like Pictionary and will keep you entertained for hours.

World of Goo is a brilliant little game, where you use Goo to create structures. It’s strangely beautiful and really has to be tried to be understood.

If you’ve ever played the desktop version of Plants Versus Zombies [No longer available] you’ll know how easy it is to play this game casually. PopCap games have a real habit of creating games that are completely addictive. The Android version is just as compelling as the original, so you won’t find yourself bored any time soon! 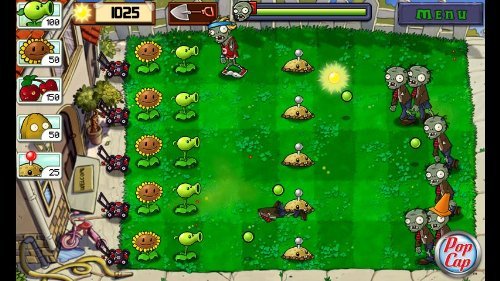 Last year’s favourite game, Angry Birds, still hasn’t lost its charm. The physics-based puzzler has you catapulting birds at pigs – again and again and again. No, I don’t mean the game is repetitive. Rather, you’ll be unable to stop!

Don’t think that we’re done letting you know about the best Android games! Check out these:

What are your favorite Android games? Let us know in the comments!