Why is Facebook asking me for a security code and where do I get it?

Facebook no longer recognises the device I am logging into whether it is my Macbook running Yosemite, my iPhone, or iPad. I use both Chrome and Safari.

I have no idea why this is telling me I haven’t logged in on this computer before when I have.

If you have any suggestions I would appreciate it. 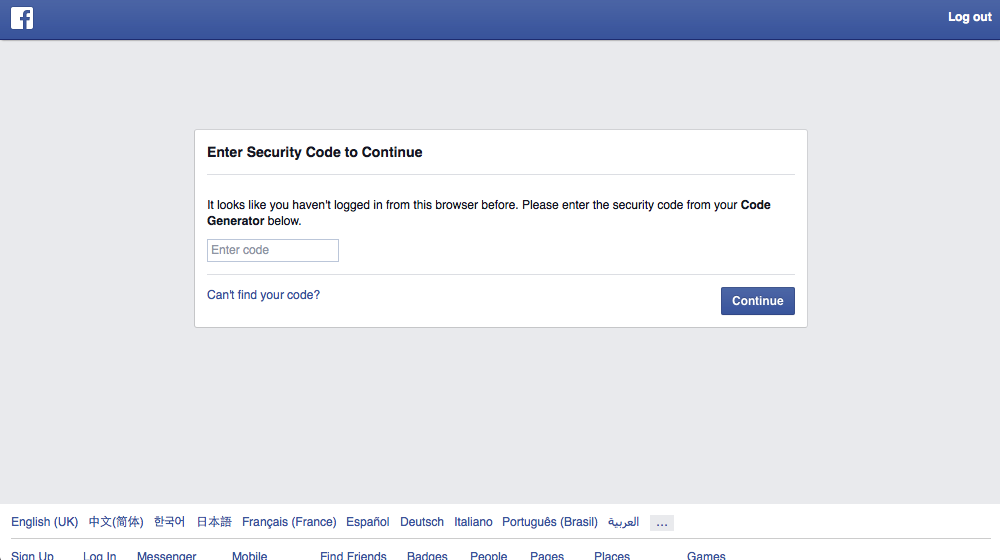 From the description of the problem, Facebook may have put a block on the account and we will get to that, but first, let’s look at the initial message from Facebook.

The first thing we need to note from the provided screenshot is the error message references the browser that is being used, not necessarily the device (computer/tablet/phone) being used. If this is being done from a computer that has multiple web browsers installed, you can simply try accessing Facebook from another web browser you have previously used on the site. If Facebook’s cookies are still there for that browser you should be able to get in without the use of a security code. If those cookies have been deleted, you will again get a message indicating that Facebook doesn’t recognize the browser you are using and you will need to look at your other options.

Next, there is no mention of Facebook sending any kind of security code but it does mention a code generator. Based on this it is safe to assume two-factor authentication What Is Two-Factor Authentication, And Why You Should Use It Two-factor authentication (2FA) is a security method that requires two different ways of proving your identity. It is commonly used in everyday life. For example paying with a credit card not only requires the card,... Read More has been enabled on your account and associated with a code generator. You will need to access this code generator in order to get the required security code; it is not being sent to you via email or SMS. It must be the same code generator/authenticator that was used at configuration time since there is an associated shared secret between the site and the authenticator app. This app may be running on any of your mobile devices. Currently, the most popular are Google Authenticator and Authy.

When two-factor authentication is initially set up on an account, not only is the shared secret established, but you are given the option to download or print a list of one-time use offline codes. This is handy if you lose or don’t have access to the mobile device with your code generator. It means that you can use one of those codes when you cannot access the authenticator app to gain access to your account and disable the use of that device for future authentication codes. It also means that you could use one of those codes right now to get into your account.

If you have reached the point where Facebook asks you for a scan of your passport or driver’s license, their system now thinks an attacker is attempting to hijack your account because of the frequency or quantity of login attempts. Once you get here, they are not concerned about identifying the device, it is all about the person using the device.

You should be presented with a form to fill out and attach a photo ID. Only the name and photo must be visible. The name must be the same as the name on the account. You can (and should) black out or blur the remainder of the information on the ID. Once sent, there will not be any type of autoreply or associated message about the information being received. If all goes well, in about a week you should get an email telling you that your identity has been verified and you can continue to use your account. Otherwise the email will tell you the information/ID provided are not sufficient to prove your identity.

If you have any other questions, do not hesitate to ask!